Generating a Maven plugin site and publishing to Github Pages

I have been working on a Maven plugin with a friend recently. This is the second plugin I’ve written for Maven. The first one I wrote (the maven gitlog plugin) simply had a README.md in the root of the GitHub repo showing usage instructions, rather than generating a Maven site and publishing that.

I have always actively avoided Maven sites. I think it is because they are often full of automatically-generated useless information, and by default they look horrible: 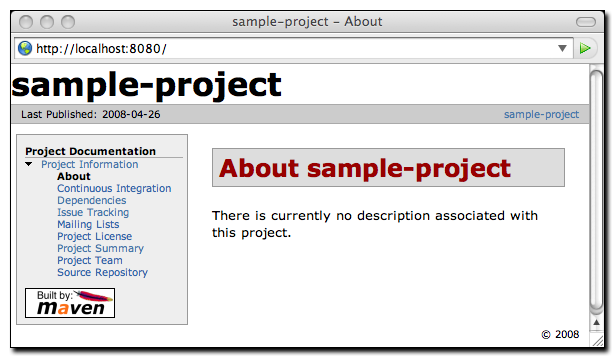 But this time, I decided it would be worth actually learning how to create maven sites properly, because I am hoping the plugin I’m working on will be used a bit, and every time I use a plugin and hit a maven generated site I go straight to the usages and goals pages. For someone who uses maven often, this is going to make things quick, and also very importantly the version of the plugin is always there, nice and clear.

I had also noticed there were some nicer looking Maven sites around these days: 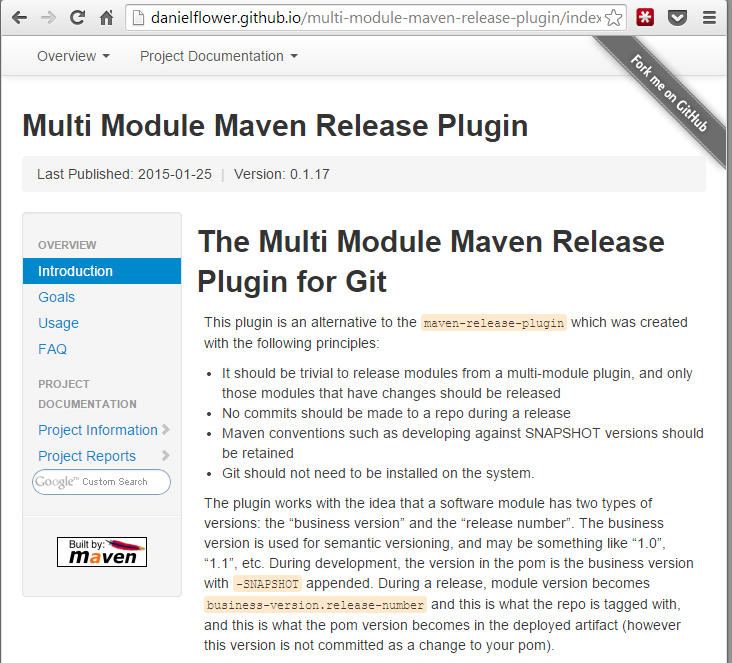 Now that is a design that doesn’t offend my eyes too badly. But while there is plenty of documentation around the web on maven sites, I found it wasn’t clear on how to do exactly what I wanted to do, which was namely:

Turns out all the above is really simple once you know how.

The Git repo that I wanted the documentation for is at https://github.com/danielflower/multi-module-maven-release-plugin. Given a URL like that, by having static HTML pages in the gh-pages branch, GitHub will automatically publish your site to a URL like http://danielflower.github.io/multi-module-maven-release-plugin/ which is a perfectly charming URL.

This repo is a Maven plugin and so has some mojos defined using annotations, with some javadoc, for example: 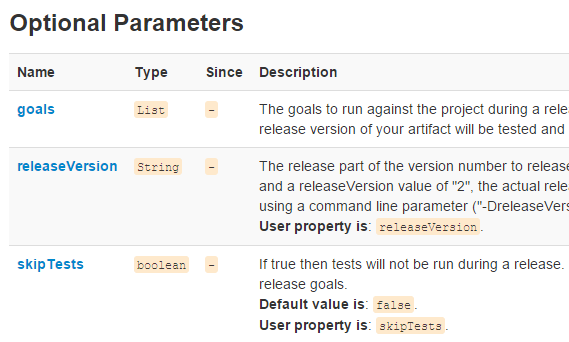 The first thing you should do is add a reference to the Maven site plugin and add the plugin that allows conversion of markdown to HTML during site generation:

At this stage, running mvn site will generate an ugly site and stick it your target/site folder, however it will not have any documentation generated for the plugin goals and parameters. To do that, you need to add the maven-plugin-plugin to the <reporting> section of your pom.

Working on a plugin, you will already have the maven-plugin-plugin defined elsewhere. You just need to define it again. If using a goal prefix - which you should be - you will need to configure this in both declarations of the plugin-plugin otherwise the documentation will be wrong. So using a property is a good idea for this.

Running mvn site now will generate a bit too much stuff. All those default reports really are rather useless, and also an index.html is generated. I wanted to have my own custom index page, and not have so many reports. To do this, you need to actually define another report that is normally defined by default and specify just the reports you do want:

At this stage, a goals page is automatically generated, however usage is not. This is a page you will just have to manually make, which is a good thing really. As the markdown dependency was registered with the site plugin above, this can be a markdown page.

All custom resources for your Maven site go into src/site/{filetype}/filename - so my usage page for example - being markdown - is located at src/site/markdown/usage.md and this is just a simple markdown file.

The usage page includes instructions on how to use the plugin. The source looks like this:

Obviously I wanted do have the ${project.*} variables automatically replaced during site generation. This didn’t work the first time, but after some googling I found you just need to append .vm to your filename and then you can use pom expressions. So this is cool - the version specified here will always be up to date.

To create the homepage, I simply added a file called index.md to the markdown folder.

Navigation is defined in src/site/site.xml:

In the ‘Overview’ section, only ‘Goals’ is a generated page, which is why it has the slightly strange name. Just set it to ‘plugin-info.html’ and it will find it there.

The reports section will contain links to all auto-generated pages.

To change the layout of a maven site, you specify a skin in the site.xml file. The following will get you the newer, more modern design:

You can also see a few other config options around the ‘fork me on github’ banner, and google search.

Generating the site during a release

Just include site as one of the maven goals and it will stick it in target/site.

Automatically uploading the site to your GitHub pages area

I was very happy to see that GitHub had already solved this problem, and it worked first-time without any troubles. All you need to do is define your GitHub credentials in your .m2/settings.xml file, add a maven plugin, and run mvn site.

First off, put your GitHub username and password in your Maven settings associated with the server ID ‘github’:

In your pom, you do need to tell the plugin which server ID you used:

And now just declare the site-maven-plugin:

It’s probably a good idea to associate that plugin with profile that you only enable during releases so that you don’t upload your maven site every time you run a build.

The documentation for this plugin is at https://github.com/github/maven-plugins

That’s it. Sure, there is XML-a-plenty, and some of the naming is a bit weird, but in the end it is quite fast to have a plugin page that looks reasonably professional, has useful information, and is automatically published.

Previous post: Running a blog with Jekyll on Windows without Jekyll
Next post: Writing a responsive site by hand using Chrome as an IDE